The Curse of Government Failure 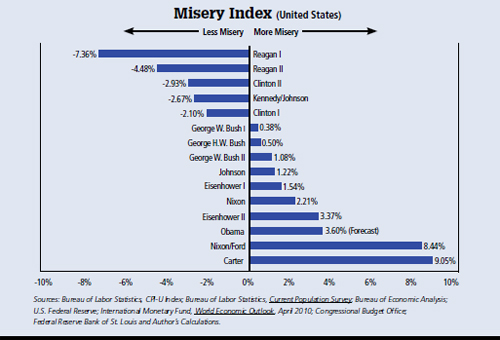 President Barack Obama has been marked by the curse of government failure. But you wouldn’t know it by listening to the political and chattering classes in Washington, D.C. and other world capitals.

In a classic response, the great dissemblers have done what they do best: when trouble strikes, they dissemble. Indeed, following the Panic of 2008, they have been busy burying their mistakes by pointing fingers, covering up and re-writing history. Alas, their assertions are rarely subjected to what they regard as the indignity of factual verification. Never mind.

When it comes to pointing fingers at the alleged culprits of our current economic troubles, the Obama administration has reached back to the rhetoric of class warfare. Who is better to blame than the usual suspects: bankers, businessmen, speculators and, of course, the “rich”?

Foreigners are favorite targets, too. China has replaced Japan as the target of choice. From the early 1970s until 1995, Japan was the enemy. The mercantilists in Washington, D.C. claimed that unfair Japanese trading practices were behind the ballooning U.S. bilateral trade deficits with Japan and that those deficits were the source of many problems in the U.S. economy.

To correct the so-called problem, the U.S. demanded that Japan adopt an everappreciating yen policy. The Japanese complied and the yen appreciated against the greenback, from 360 in 1971 to 80 in 1995. But, this didn’t close the U.S. trade deficit with Japan. Indeed, Japan’s contribution to the U.S. trade deficit reached almost 60% in 1991. And, if that wasn’t enough, the yen appreciation contributed to pushing Japan’s economy into a deflationary quagmire.

Today, the U.S. is playing the same blame game with China. And why not? After all, China’s contribution to the U.S. trade deficit has surged to almost 45%, reaching magnitudes registered by Japan in the early 1990s (see accompanying chart). Let’s hope China fails to follow Japan’s lead and ignores U.S. demands for an ever-appreciating yuan. Such a wrongheaded Chinese compliance would do little more than attract massive hot money flows into China and create instability in China. This would be bad news for the world economy’s main growth locomotive (see accompanying chart). When it comes to finger pointing and re-writing history, officials from the Federal Reserve take the prize. For example, in early September, Chairman Ben Bernanke told the Financial Crisis Inquiry Commission that the Panic of 2008 was sparked by multiple mistakes in private firms and the lack of proper government regulations. According to the Chairman, the Fed bore no responsibility for the monetary roots of the credit mania that preceded the Panic of 2008. The reality is quite different. It is punctuated by policy errors and government failures before and after the crisis. The great enabler was none other than the Fed. Without the central bank’s “pedal to the metal” monetary policy — a policy designed to fight the alleged dangers of deflation — the classic Austrian boom-bust cycle we experienced could not have been realized.

Without the Fed pushing interest rates to artificially low levels, yield-chasing speculators, who employed carry trades and fantastic leverage, would have never seen the light of day. Yes, there were other government failures that contributed to various asset bubbles and associated instabilities in the real estate markets, for example. But, the primary enabler was the Fed and its ultra-accommodative monetary policy. Among other things, it was the Fed’s monetary laxity that led to the fall of the dollar against the euro and the dramatic rise in commodity prices that climaxed in July 2008.

After the asset bubbles burst, the U.S. government has remained wrongfooted, introducing one policy error after another and generating a series of government failures. First, there has been too much government stimulus. As the accompanying table indicates, the Panic of 2008 was an invitation — as is the case with all crises — to expand the scope and scale of government. There is no doubt that the U.S. has witnessed a regime change in terms of the relative size of the federal government. The “Law of the Ratchet” is alive and well. Indeed, the crisis did ratchet up government expenditures, even according to the overly optimistic assumptions contained in the Office of Management and Budget’s estimates.

The oft-repeated Keynesian rationale for the so-called stimulus spending — namely that it stimulates — should be thrown into the dust bin. When government spending is ratcheted up to new, unprecedented (since 1969) levels, citizen-taxpayers become very anxious, particularly if the spending is introduced when a country’s fiscal position is weak.

Not surprisingly, the Obama administration’s government spending binge is not working. It is actually subtracting from economic growth. As Prof. Harald Uhlig of the University of Chicago has shown in a paper published in the American Economic Review (May 2010), $3.40 of lost output is associated with every dollar of government spending. So, the much touted fiscal multiplier is negative, not positive. This is a case — like many others in the government sphere — in which doing nothing would have been superior to doing something.

Second, and related to the first, there has been too much government activism in response to the Panic of 2008. For example, according to research results contained in Prof. Laurence Kotlikoff’s most recent book, Jimmy Stewart is Dead, there were over 115 government regulatory agencies for financial services before the crisis. Where were they as the Fed-induced credit mania built to a climax?

This past summer, a 2319-page Dodd-Frank financial reform bill was signed into law by President Obama. This law will add many new regulations and regulators. How many? No one knows because the complex rule-making process that accompanies the complex law has hardly begun. Talk about generating unnecessary uncertainty! Third, the anti-market, anti-business rhetoric coming out of Washington, D.C. has been over the top. To get a handle on why the rhetoric is so sharp, there is no better place to start than to read the moderate Business Roundtable’s 54-page compendium of the Obama administration’s anti-business agenda. It’s enough to cause any investor interested in fueling the recovery (and making a profit) to think twice.

These three post-crisis government errors, plus the Fed’s role in fueling a classic Austrian cycle, have resulted in a great deal of regime uncertainty. People don’t know what to expect next, particularly since President Obama has recently attempted to throw a “Hail Mary” pass by proposing yet another stimulus package.

The hallmarks of the Panic of 2008 are policy errors and government failure. These are encapsulated in the accompanying chart which displays the explosion of the Fed-controlled monetary base after the Panic of 2008 and the collapse of the money multiplier for the broadest measure of money, MZM. Even though the Fed has pumped up the monetary base, the credit channels are blocked. Banks are reluctant to loan and borrowers don’t want to borrow. With such a credit deadlock, broad money growth is anemic, at best. Under these monetary conditions, we can expect a growth recession — one in which the economy grows, but grows below what has been its trend rate of growth.

While President Obama sings the glories of big government, it is ironic that he has been marked by the curse of government failure. One metric that measures how this curse will affect the president’s performance is the Misery Index (see accompanying chart). I have forecast what President Obama’s most likely Misery Index score will be at the end of his current term. This miserable score is already baked in the cake and can be laid squarely at the feet of President Obama’s own policy errors and government failure. For a president whose agenda is designed to overthrow the Reagan Revolution, the Misery Index should be a sobering reminder that free markets, not big government, generate prosperity.

0 responses on "The Curse of Government Failure"