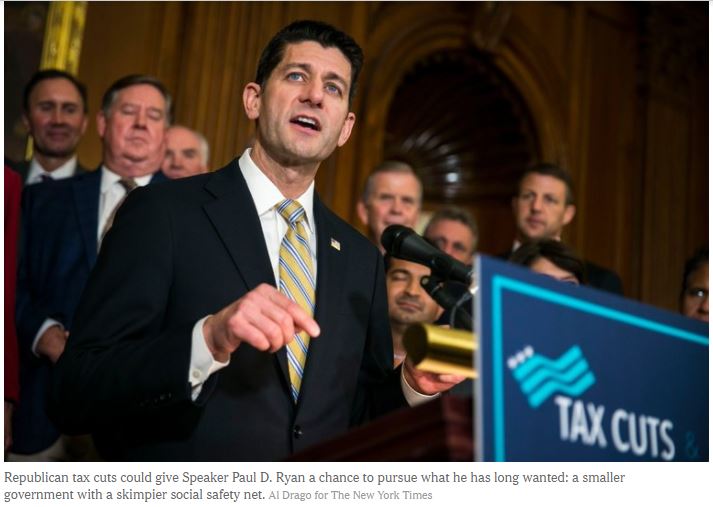 As the tax cut legislation passed by the Senate early Saturday hurtles toward final approval, Republicans are preparing to use the swelling deficits made worse by the package as a rationale to pursue their long-held vision: undoing the entitlements of the New Deal and Great Society, leaving government leaner and the safety net skimpier for millions of Americans.

Speaker Paul D. Ryan and other Republicans are beginning to express their big dreams publicly, vowing that next year they will move on to changes in Medicare and Social Security. President Trump told a Missouri rally last week, “We’re going to go into welfare reform.”

Their nearly $1.5 trillion package of tax cuts, a plan likely to win final approval in the coming days, could be the first step. But their strategy poses enormous risks, not only for millions of Americans who rely on entitlement programs, but also for Republicans who would wade into politically difficult waters, cutting popular benefits for the elderly and working poor just after cutting taxes for profitable corporations.

“The way to get at fixing the debt is to feel like everybody is willing to put something on the table,” said Maya MacGuineas, the president of the Committee for a Responsible Federal Budget, a bipartisan group. “Once you have one side grab all it could, you’re never going to have the other side show up.”

Even if the tax cut sparks the kind of economic growth that Republicans advertise, the tax bill will increase the deficit by $1 trillion over 10 years, the nonpartisan congressional Joint Committee on Taxation said.

And it was passed along sharply partisan lines, offering nothing to Democrats, and leaving them with no obligation or incentive to negotiate cuts to Medicare, Medicaid and Social Security, the entitlement programs that are driving up spending, but are also the pride of the Democratic Party.

For his part, Mr. Trump spent his campaign promising not to cut Medicare and Social Security. And Republicans will probably find, as they did when they failed to repeal the Affordable Care Act, that the public rises up to defend the programs they are trying to cut. Whatever political boost the Republicans could get for passing a tax cut could evaporate fast.

“Republicans are going to find that Democrats treat this tax bill the way Republicans treated Obamacare — it’s not trusted by people on the other side of the aisle,” said former Senator Judd Gregg, who was chairman of the Budget Committee and a member of the Simpson-Bowles commission, a bipartisan group of lawmakers and budget experts that produced a deficit reduction plan in 2010. “It will become a target, a rallying cry, which is unfortunate, because good tax reform, when done right, is not only good for the economy, it’s good for the parties.”

Many of the Republicans’ natural allies have criticized the bill for adding to the deficit and not dealing with the costs that were already driving up the government’s red ink. In an op-ed in The Washington Post, the leaders of that 2010 commission, former Senator Alan Simpson of Wyoming, a Republican, and Erskine Bowles, a Democrat who is a former White House chief of staff, accused the Republicans of “deficit denial,” saying the bill incorporated only “goodies” and virtually no “hard choices.”

“Republicans have been telling themselves for years that they wanted to get into power so they could balance the budget, reduce the debt, cut spending and fix entitlements,” Ms. MacGuineas said. “They’ve just made it harder, not easier.”

For weeks, Democrats and their allies have been accusing Republicans of a “two-step” deceit, warning that they would cut taxes now and then use the increase in the deficit they caused to demand entitlement cuts later.

“When you run up the deficit, your next argument will be, ‘Gee, you’ve got a large deficit,’” Senator Bernie Sanders of Vermont, a former Democratic presidential candidate, said in an interview.

Now Republicans are beginning to acknowledge as much. Mr. Ryan said at a town hall-style meeting last month that Congress had to spur growth and cut entitlements to reduce the national debt. 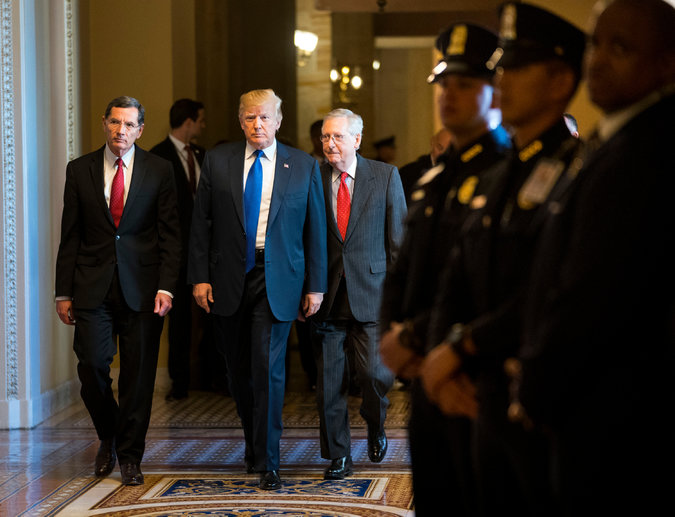 The Republican tax plan, he said “grows the economy.” But, he added, “we’ve got a lot of work to do in cutting spending.”

Senator Marco Rubio of Florida was more specific on Wednesday, telling business leaders that the tax cuts were just the first step; the next is to reshape Social Security and Medicare for future retirees.

“The argument would be we can’t cut taxes because it will drive up the deficit,” he said, saying that he disagreed. “You have to do two things,” he said. “You have got to generate economic growth because growth generates revenue. But you also have to bring spending under control. And not discretionary spending. That isn’t the driver of our debt. The driver of our debt is the structure of Social Security and Medicare for future beneficiaries.”

The Congressional Budget Office projects that spending on Social Security, Medicare and Medicaid will cost the federal government $28.6 trillion through 2027. The tax cut, estimated at nearly $1.5 trillion, makes the problem only mildly worse.

But if that trillion-dollar boost to the government’s yawning fiscal hole is comparatively small mathematically, it could add up to much more politically if it keeps Democrats away from the negotiating table.

And even if Republicans do not pursue changes to entitlements, the tax bill will trigger pay-as-you-go requirements that Congress cut spending. That would be a particularly big hit to Medicare, which would face a $25 billion cut for the current fiscal year. Groups like AARP, the lobby for older Americans, warn that it would force doctors and hospitals to turn away patients because reimbursements would be cut so drastically.

Mr. Ryan and Senator Mitch McConnell of Kentucky, the majority leader, released a statement Friday saying that the so-called pay-go cuts “will not happen” because Congress would waive the law, as it has in the past. But they will need Democratic votes to do that, in a climate that is unusually partisan.

Regardless of whether Republicans can waive these cuts, David Certner, legislative counsel for AARP, said, “You know they’re going to come back and say, ‘We need to make more cuts to deal with the growing debts and deficit.’”

Some deficit hawks complain that Republicans have cast away any mantle of fiscal responsibility.

Robert L. Bixby, the executive director of the Concord Coalition, a nonpartisan organization that encourages fiscal responsibility, complained of hypocrisy from Republicans who have been clamoring to lift the spending caps that were created by the 2011 Budget Control Act.

If the tax cuts do not generate the revenue Republicans are expecting, he predicted, “people will say, ‘No, we’re not getting the growth because we should have cut taxes even more.’”

The United States is already facing a gloomy fiscal landscape. The federal deficit this year topped $660 billion, despite healthy economic growth, and the national debt now exceeds $20 trillion. Janet L. Yellen, the outgoing chairwoman of the Federal Reserve, appointed by President Barack Obama, warned last week that the national debt “is the type of thing that should keep people awake at night.”

But Democrats and their allies — and even some usual Republican allies — complain that Republicans are dishonest not to debate changes in spending and tax cuts at the same time, as the Simpson-Bowles commission did.

Sharon Parrott, a senior fellow at the left-leaning Center on Budget and Policy Priorities, said Republicans understood how bad it would look to cut food benefits for poor families and health care for the elderly at the same time they were cutting taxes for corporations and the highest earners.

“There’s a reason they separate them,” she said. “They think they can get away with it.”

But in an election year with high political engagement, she said, “I think it’s wrong to count out the idea that the public will figure it out.”