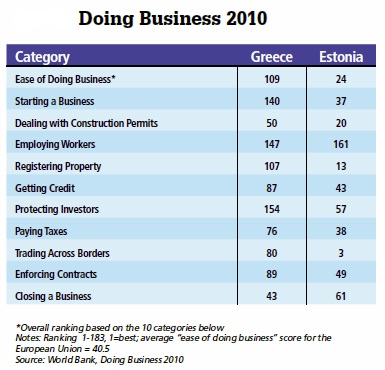 On May 12th, the European Commission welcomed Estonia with open arms, recommending that the tiny Baltic country be allowed to adopt the euro next year. That’s a far cry from the frosty reception Greece was accorded on May 2nd, when its European partners, plus the International Monetary Fund, promised to pony up $145 billion to rescue that fiscally reckless Balkan nation. Greece and Estonia are truly economic antipodes.

Less than two decades ago, Estonia was in the grip of the Russian Bear and was part of the Soviet empire. All that changed on September 6, 1991, when Estonia’s fully independent status was conceded by the USSR State Council. Estonia immediately set out to put its economy on a free-market course. There were no fond memories of the good old communist days, nor were there any illusions about where third-way socialism would take Estonia.

Estonia’s problem was its currency. It was still part of the ruble zone — stuck with the inconvertible, hyperinflating ruble. I thought the best solution would be to establish an Estonian currency board in which an Estonian kroon would be fully convertible and trade at a fixed rate with the Deutschmark. The currency board system would be on autopilot and place Estonia into a unified currency area with the mighty Deutschmark at its center.

In collaboration with Prof. Lars Jonung and Dr. Kurt Schuler, I wrote a book laying out the details of how to establish and operate an Estonian currency board. An English edition of Monetary Reform for a Free Estonia (1992) was published in Stockholm, while an Estonian-language edition was published in Tartu, Estonia. On May 5, 1992, I presented our currency board blueprint to the last Chairman of the Presidium of the Supreme Soviet of Estonia Arnold Rüütel, Prime Minister Tiit Vähi and other Estonian notables in Tallinn. Little more than a month later, the Estonian currency board was up and running.

The currency board system has worked according to its design. When foreign exchange flows into (out of) the country, the kroon monetary base increases (decreases) in roughly a one-to-one correspondence.

The accompanying chart shows the movements in foreign exchange flows and the kroon monetary base for the past six years.

That the system has worked is not surprising. After all, the Estonians understood that they “owned” the currency board and that if they failed to follow its rules, it might blow up and they would have to foot the bill themselves.

The Estonians believed that they couldn’t count on being free riders. They also knew that their independence depended on a stable currency and a dynamic free-market economy. For them, stability might not be everything, but everything is nothing, without stability.

Let’s take a look at the economic antipode — Greece. In the same year it was recognized as a state (1832), Greece defaulted on its debt. Fast forward and we observe Greece’s entry into the European Monetary Union on January 1, 2001, two years after the eleven original members. Greece’s entry was under a bit of a cloud because most either knew, or suspected, that it came with some accounting trickery. Never mind. The Greeks were enthusiastic entrants into the “club.” Unlike Estonia’s currency unification with the eurozone, Greece’s was as a full member of the European Monetary Union. If Greece could get by without following the rules, it could free ride — the other members of the “club” would pick up the bill, if Greece got into trouble. Well, Greece got into trouble. It was a classic case: promise entitlements without the means to pay for them. This created a fiscal time bomb that will eventually explode.

Indeed, Greece’s death spiral will end with debt restructuring or the outright default of its sovereign debt. While politicians and bureaucrats from the European Union, the International Monetary Fund and Greece tell us that the bailout package will defuse Greece’s time bomb, don’t believe their “cheerful Charlie” chant.

Their rescue package fails to address the anti-market (antigrowth) structure of the Greek economy. For those who might question this statement, take a look at the accompanying table that compares the ease of doing business metrics for Greece and Estonia. Without growth, Greece is doomed.

This brings us to the euro. Many notable economists — from Harvard’s Prof. Martin Feldstein to Princeton’s Prof. Paul Krugman — have concluded that Greece is in a euro trap.

They assert that there is no way for Greece to become competitive and grow because it no longer has its own currency, the drachma, to devalue.

As Dr. Domingo Cavallo, Argentina’s former Minister of Economy, and Dr. Joaquín Cottani, former Undersecretary of Economic Policy in Argentina, have shown in a paper that will be presented at Palazzo Mundell in July, the devaluation trap is nonsense.

Their reform would also impose Greece’s VAT tax at a single, uniform rate — rather than at its current three rates. These two supply-side tax changes would be roughly fiscally neutral, when based on conservative static calculations. But what about competitiveness? It would get a big boost, roughly equivalent to a 40%-45% currency devaluation. Without some new thinking — both inside and outside Greece — the collateral damage from Greece will continue to keep the eurozone in what Prof. Ralph Hawtrey (1879-1975) called a “credit deadlock” and depress broad money growth (see accompanying chart). This is very troubling. Indeed, the IMF’s anemic growth forecasts for Europe might be too rosy (see the accompanying table).