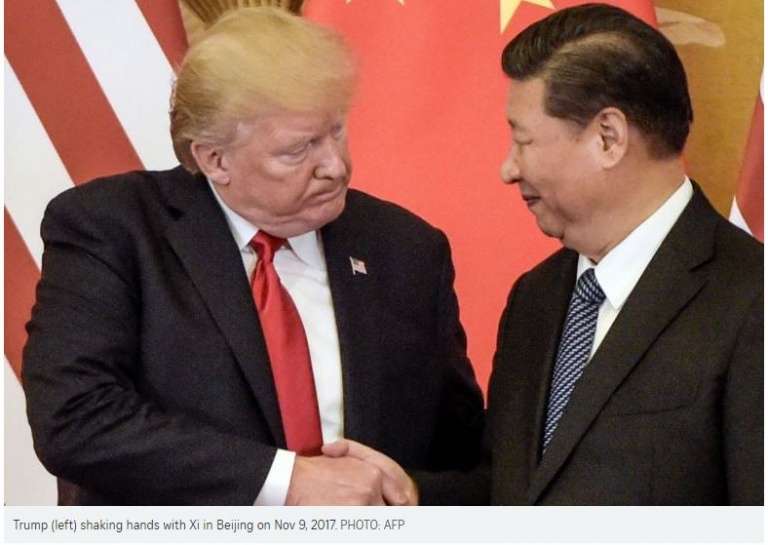 While Trump didn’t specify whether the new sanctions would be imposed by China or the US, the Chinese government has much greater economic leverage over North Korean leader Kim Jong Un as the nation’s biggest trading partner.

“Just spoke to President XI JINPING of China concerning the provocative actions of North Korea,” Trump said in a tweet. “Additional major sanctions will be imposed on North Korea today. This situation will be handled!”

While White House spokesmen didn’t immediately respond to requests to clarify Trump’s tweet, Secretary of State Rex Tillerson told reporters at the State Department, “We have a long list of additional potential sanctions, some of which involve additional financial institutions. The Treasury Department will be announcing those when they’re ready to roll those out.”

Pyongyang launched an intercontinental ballistic missile test early Wednesday North Korea time – its third this year – and the regime declared that it could now hit the entire US with a nuclear weapon.

That underscored Trump’s limited options as Kim approaches his ambition to become a nuclear power with global reach, an outcome the US President has vowed to prevent.

Sanctions against North Korea have had limited impact on the regime’s economy. There have been no direct talks on its nuclear weapons for years. And a military strike is an unpalatable option for some of Asia’s biggest economies, given the risk of widespread devastation in the region from all-out conflict.

While experts doubt some of Kim’s claims, they agree he’s getting closer to having a credible nuclear deterrent. For Trump, who again vowed to “take care” of North Korea, that means some hard choices are coming.

The White House said in a statement following the call with Xi that Trump “emphasised the need for China to use all available levers to convince North Korea to end its provocations and return to the path of denuclearisation.”

But the latest missile test “leaves Trump talking a good game with few options,” said Christopher Green, a senior adviser at the International Crisis Group who wrote a book on North Korean politics published last year. “No American administration should formally accept a nuclear North Korea, but policy needs to change to reflect the reality on the ground.”

North Korea-watchers differ on when the regime could pose a credible threat to the US, with estimates ranging from months to years. Doubts remain about whether it can shrink a nuclear weapon to fit a warhead onto a missile, ensure its survives reentry into Earth’s atmosphere and target specific locations.

None of the major powers – China and Russia included – have said they will recognise North Korea as a nuclear state, a stance Japanese Prime Minister Shinzo Abe reiterated on Wednesday. Yet since North Korea’s first nuclear test in 2006, repeated rounds of sanctions have failed to slow the regime’s push for weapons that it says are needed to deter a US invasion.

The United Nations Security Council will meet Wednesday. Already this year it has passed two sets of sanctions blocking about 90 per cent of North Korea’s reported exports, including coal and seafood, as well as imports of some oil products.

Trump has gone further, authorising the Treasury to cut foreign individuals or entities off from the financial system if they interact with Pyongyang, including banks. He has punished several companies in China that do business along its porous land border with North Korea.

Still, it’s unclear if China and Russia will agree to much more. During the last sanctions in September, the countries nixed a US bid for a full oil embargo and ship inspections. They have repeatedly said they want both sides to back down and start talks, a proposal China repeated on Wednesday.

“Security Council members could also consider a naval blockade, but that’s like a precursor to war,” said Koh Yu-hwan, who teaches North Korean studies at Dongguk University in Seoul and advises the South Korean government. “Instead, countries are likely to press China and Russia to be stricter with the rules on guest workers and smuggling.”

Some analysts say sanctions just need more time to work. Stephan Haggard, who writes about North Korea’s economy for the Washington-based Peterson Institute for International Economics, said in a presentation this month that North Korea could experience a financial crisis due to deteriorating access to foreign exchange.

Others dispute that, arguing that North Korea’s economy is largely informal and foreign currencies like the US dollar and Chinese yuan are regularly used to trade. The stability of the black market won-dollar exchange rate is a healthy indicator, according to Steve Hanke, a professor of applied economics at Johns Hopkins University in Baltimore.

“The implication is that the gray economy is doing pretty well,” said Hanke, a former economic adviser in Yugoslavia, which was sanctioned during the Balkan war in the 1990s. “I am not suggesting that this is some kind of Paradise Lost. It’s a hell hole, but I’ve seen other hell holes that got by.”

John Kerry, secretary of state under the Obama administration, advised Trump after the launch to pressure China and increase sanctions. He added the President’s rhetoric “moves us in the wrong direction.”

Trump has sent mixed signals towards North Korea over the past month, at one point calling for Kim to make a deal and then slapping him for being a state sponsor of terrorism.

Tillerson said after the launch that “diplomatic options remain viable and open, for now.”

While the US has long said that North Korea must be willing to abandon its nuclear programme for talks to begin, Tillerson said this month he can envision having a conversation ahead of formal negotiations. Trump even said it would be possible for him to be friends with Kim, shortly after suggesting the North Korean leader was “short and fat.”

In announcing the latest test, Kim sought to portray his country as a responsible nuclear power. He said the weapons don’t pose a threat as long as North Korea’s interests are respected.

North Korea’s actions are designed to give it “a better bargaining position once negotiation begins,” said Yang Xiyu, former director of the Chinese foreign ministry’s Office on Korean Peninsula Issues. “It’d serve their best interests to announce they’re willing to return to dialogue after their nuclear-state status is firmly established.”