A Big Bang for Greece 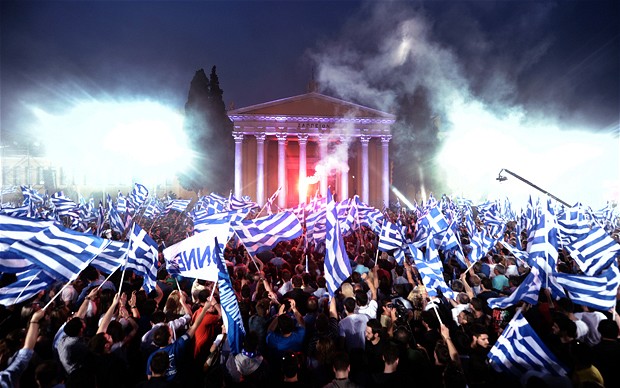 How did Greece get into the death spiral that it’s in? Unfunded entitlements. In other words, promise somebody something, don’t come up with the financing for it, and pretty soon you find yourself in a fiscal/debt crisis.

This is where Greece ended up, and in February, the Greek government called in some outside advisers (Joseph Stiglitz for one), and the blame game began. Prime Minister Papandreou, who is also president of Socialist International, started blaming everyone. First, it was the speculators. Then he went on a tear against his own colleagues in the European Union. The Germans really got whacked — according to Mr. Papandreou, they were a big cause of Greece’s troubles.

Ironically, after blaming outsiders for all their problems, the Greeks have called in the foreign doctors. In this case it isn’t just the IMF, but also the EU politicians and bureaucrats who are involved. But this may ultimately be a case in which the doctors kill the patient.

They haven’t started with what they should be doing, but with a standard IMF-type austerity program. The government has promised to cut public expenditures. It has also raised taxes. Unlike neighboring Bulgaria, which did exactly the right thing by refusing to increase its VAT, Greece has increased its VAT twice since the crisis.

What should Greece have done? It should have started with a Big Bang, doing a number of things simultaneously a la New Zealand. In 1984, New Zealand elected a Labor government after Robert Muldoon’s National Party governments had made a complete mess of the economy. The Muldoon governments introduced, over the course of almost a decade, a socialist-style system in New Zealand. Labor, under finance minister Roger Douglas, introduced structural reforms centered on deregulation and competitiveness. As a consequence, New Zealand had a massive economic revolution after the ‘84 election. Greece should adopt a New Zealand-type Big Bang.

As part of its Big Bang, Greece should have begun by rescheduling its debt. But it also should have implemented a supply-side fiscal consolidation. That means cutting government expenditures, but also changing the tax regime.

Right now, Greece has very onerous payroll taxes that are paid by employers and, ultimately, labor. As part of a Big Bang, Greece should eliminate the employer contribution to payroll taxes, which is currently 28% of wages (employees pay a further 16% rate directly).

At the same time, Greece should make its VAT rates uniform. Right now, there are three VAT rates in Greece. This is typical in Europe. You have the regular VAT, a VAT that is reduced by 50% for other categories, and, finally, a super-reduced VAT. I would eliminate the reduced and super-reduced rates, and just have one, uniform rate for the VAT — one set below the current top VAT rate of 23%.

If Greece did those two things, it would end up generating more revenue than it is generating right now. Even when based on a static, simple-minded analysis, that would put Greece ahead of the revenue game.

But more importantly, it would also substantially reduce its economy’s labor costs overnight. Employers’ social security contributions are about 7.8% of GDP. Eliminating the employer contribution would yield about a 22% reduction in the overall Greek wage bill as a percentage of GDP. This would make the Greek economy more competitive — without the currency devaluation that some commentators claim is necessary. These changes would also, obviously, reduce consumption, increase savings, and reduce the level of debt in the country.

Allow me to make a comment about devaluation. There are some people who are wringing their hands and saying, “Well, the problem with Greece is that it put itself into a euro straitjacket and it can’t devalue the drachma anymore. So, Greece is in a trap. There’s nothing it can do!”

But there is something the Greeks can do. They can reduce the economy’s total labor cost by 22%, simply by eliminating the employer contribution to payroll taxes. To see what the size of a devaluation would have to be to generate a positive competitiveness shock of this magnitude, let’s assume that 50% of a devaluation would be passed through to the economy in the form of increased inflation — a reasonable assumption about a small, open economy like Greece’s.

In this case, Greece would have to have a 44% devaluation to be equivalent, in terms of competitiveness, to the positive shock that would accompany the elimination of the employer contribution to payroll taxes.

So, with the elimination of the employer contribution to the payroll tax, Greece would enhance its competitiveness. The enhancement would be equal to roughly a 44% devaluation. Moreover, the supply-side generated competitiveness would not be accompanied by the inflation and widespread private-sector bankruptcy that a devaluation would provoke.

Needless to say, neither Greece nor its international partners are contemplating a voluntary debt restructuring, let alone a supply-side Big Bang, which makes it more likely that Greece will remain stuck in a trap. But don’t let anyone tell you there’s nothing Greece could do. It’s not too late to change course. What’s more, other countries in Europe that are facing down a possible debt crisis could likewise try a similar approach — reschedule debt, cut taxes on labor to improve competitiveness and spur job creation, while raising some consumption taxes to keep the revenue coming in. There is a way out of the Greek trap.

0 responses on "A Big Bang for Greece"