048: Steve Hanke on Currency Boards, Moral Hazard and the Benefits of Privatization 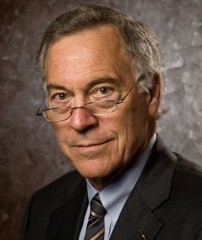 Steve Hanke is a Professor of Applied Economics, specializing in currency boards. He is Co-Director of the Institute for Applied Economics, Global Health, and the Study of Business Enterprise at The Johns Hopkins University in Baltimore.

Steve is a Senior Fellow and Director of theTroubled Currencies Project at the Cato Institute in Washington, D.C. and a member of the Charter Council of the Society of Economic Measurement and the Financial Advisory Council of the United Arab Emirates.

Previously, Professor Hanke was a Senior Economist on President Reagan’s Council of Economic Advisers and was also an Advisor to the Presidents of Bulgaria, Venezuela, and Indonesia.

He played an important role in establishing new currency regimes in Argentina, Estonia, Bulgaria, Bosnia-Herzegovina, Ecuador, Lithuania, and Montenegro. Professor Hanke has also advised the governments of many other countries, including Albania, Kazakhstan and Yugoslavia.

In 1998, Steve was named one of the twenty-five most influential people in the world byWorld Trade Magazine.

Steve Hanke’s most recent books are Zimbabwe: Hyperinflation to Growth (2008) and A Blueprint for a Safe, Sound Georgian Lari (2010).

Friedrich Hayek, Kenneth Boulding of the University of Colorado  and Bob Mundell

In this episode, you will learn:

The currency board is not allowed to emit credit to the government. If the government needs money for fiscal expansion, the only way to get this finance (in the form of your local currency) is to take hard currency in (like the euro) and exchange it for the local currency. Bulgaria has been doing this since 1997. The government cannot sell bonds to raise finance. They convert the euro (previously the Deutschmark) into their local currency, the lev, and can then carry out fiscal stimulus. Consequently, Bulgaria has one of the lowest fiscal deficits in Europe.

On Bulgaria and Why It Should Not Join the Eurozone:

“With the currency board, they (Bulgaria) ‘clone’ the euro, so they’re in a unified currency area with the eurozone but they’re not formally part of the eurozone itself. I’ve counselled the Bulgarians, and the best thing to do is to stay with that arrangement. And the reason why is that the eurozone, the common currency area, has a huge moral hazard associated with it. That is, something that creates bad behaviour encourages bad behaviour and Greece is a perfect example.” – Professor Steve Hanke

On the Greek Deceit and Its Fiscal Deficit:

“Greece entered the eurozone in 2001 on false pretences. They cooked the books and got in. They were allowed in the club even though the club knew the Greeks were lying in terms of their economics statistics.”

“The Greeks calculated that they could spend like drunken sailors, which they did and ran a completely irresponsible fiscal operation.”

“The moral hazard is you join a club and if you think the club won’t enforce its rules and won’t force you to tow the line, you will just go on your merry way spending and deficit spending and knowing, or at least thinking that, in this case the eurozone, would bail you out.”

Greece ranks 151 out of 189 countries for the ability of doing business. If you make a contract in Greece, the probability of having that contract enforced is very low by international standards. It’s like being in Zimbabwe. Greece is supposed to be part of the European Union and a modern country but it isn’t.

Greece should leave the eurozone, set up a currency board and re-introduce the Drachma. This would create fiscal discipline just like the situation in Bulgaria.

Quotes by Steve Hanke in Episode 048 of the Economic Rockstar Podcast:

I was hedging and trading when I was 14 years of age. I was trading with my grandfather -…

Hong Kong was aways a unilateralist free trader. That encourages competition, entrepreneurship and productivity. The countries with open trade tend to be more free market in general and they grow more rapidly. – Steve Hanke

“About 90 Central Banks should just be done away with completely and either a currency board be put in or a stronger foreign currency like the dollar, the euro or the yen.” – Steve Hanke

“If you want lower fiscal deficits, lower inflation and higher rates of growth you adopt with a currency board system or dollarize” – Steve Hanke

“He was delightful and charming and very interesting, particularly for Mrs Hanke and myself. One of Mrs Hanke’s Great Aunts was one of Hayek’s earlier loves of his life.”

Where to Find Steve Hanke:

0 responses on "048: Steve Hanke on Currency Boards, Moral Hazard and the Benefits of Privatization"