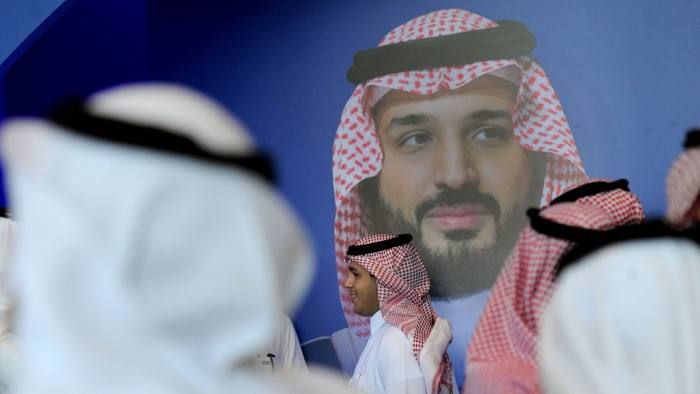 Men stand in front of a poster of Crown Prince Mohammed bin Salman, who has launched a crackdown against corruption © AFP
Saudi authorities are negotiating settlements with princes and businessmen held over allegations of corruption, offering deals for the detainees to pay for their freedom, say people briefed on the discussions.

In some cases the government is seeking to appropriate as much as 70 per cent of suspects’ wealth, two of the people said, in a bid to channel hundreds of billions of dollars into depleted state coffers.

The arrangements, which have already seen some assets and funds handed over to the state, provide an insight into the strategy behind Crown Prince Mohammed bin Salman’s dramatic corruption purge.

The crackdown has led to the detention of hundreds of royals, ministers and the country’s richest magnates, including Prince Alwaleed bin Talal, the billionaire, Waleed al-Ibrahim, the founder of Middle East Broadcasting Center, which owns the Saudi satellite television channel Al Arabiya, and Bakr bin Laden, chairman of the Saudi Binladin construction group.

Some of the suspects, many of whom have been detained at the Ritz-Carlton hotel in Riyadh since last week, are keen to secure their release by signing over cash and corporate assets, say people close to the negotiations.

“They are making settlements with most of those in the Ritz,” said one adviser. “Cough up the cash and you will go home.”

The settlements aim to recover billions of dollars allegedly accrued through corruption at a time when the government is grappling with a recession triggered by prolonged low oil prices and a budget deficit of $79bn last year.

The attorney-general has said he is investigating allegations of corruption amounting to at least $100bn. People briefed on the negotiations say the government wants to take back at least that figure, though the target may rise to as much as $300bn.

More arrests are likely as the government widens its graft probe, one of the people said.

The round-up has won plaudits among many Saudis who for years have been angered by what they perceive to be corruption involving members of the huge royal family and politically connected businessmen. But foreign investors have been spooked by the scale of the campaign and are concerned that the crackdown is a selective purge.

One multi-billionaire businessman held at the Ritz has been told to hand over 70 per cent of his wealth to the state as a punishment for decades of involvement in allegedly corrupt business transactions.

He is inclined to pay, one of his advisers said, but details of the mechanics of returning assets and cash have yet to be hammered out.

The businessmen in custody are being asked to hand over assets. Settlements for royals are likely to also include pledges of loyalty to Prince Mohammed, the adviser added.

Another detainee has told his staff that the authorities may be looking to take ownership of his main business.

Families of detained suspects have started to hire consultants to assist efforts to secure their relatives’ release and to ringfence the damage to their business interests.

“They are looking for ways to isolate the tainted shareholder and keep the business going,” said the adviser.

The crackdown caught many of the suspects unawares, say their advisers.

One of the detainees, for example, met with representatives of Prince Mohammed a few weeks before he was detained in Jeddah. At the time, he believed that the meeting had been productive, assuming it signalled how he should continue his extensive domestic and international interests.

Prince Alwaleed, who owns stakes in the likes of Citigroup and Twitter and is a nephew of King Salman, had publicly backed Prince Mohammed’s efforts to reform the kingdom before his arrest on allegations of bribery and extortion.

Many Saudis say the move is a positive step at a time when many ordinary people are enduring the pain of the downturn.

“Why should the poor take all the pain of austerity,” said one Saudi academic. “The rich need to pay their way too.”