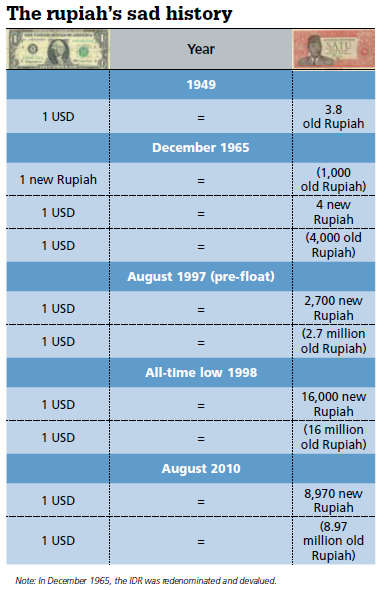 The Indonesian rupiah has garnered plenty of news coverage recently. Most of it has focused on the rupiah’s newfound stability. That stability, in part, has given Bank Indonesia (BI) enough courage to float a new idea. In early August, the BI signaled that it was considering a redenomination of the rupiah.

The BI proposes to chop three zeroes off current rupiah denominations. The last time the rupiah cast three zeroes to the wind was nearly 45 years ago — in December of 1965.

At this point, a redenomination makes sense. It would give “one” rupiah some operational meaning, make most calculations simpler and make many transactions more convenient, reducing transaction costs. The only thing that doesn’t make sense is the BI’s suggestion that the redenomination process will take a long time — up to ten years.

If a decision to redenominate occurs, which I think it should, the implementation should be rapid, not slow. A slow implementation process implies that a confusing dual denomination system would exist. This could be a formula for failure.

Talk of a rupiah redenomination brings to mind the rupiah’s sad history (see accompanying table). When the Dutch recognized an independent Indonesia in 1949, one rupiah was equal to a Dutch guilder, whose value was 3.8 per US dollar. In December 1965, the rupiah was redenominated at a rate of 1,000 old rupiah to one new rupiah (today’s unit). In terms of the original rupiah, there has been a depreciation in the exchange rate since independence from 3.8 per dollar to approximately nine million per dollar today. That amounts to a depreciation against the dollar of almost 2.4 million times.

With those kind of numbers, it’s not surprisingly that, over the past 50 years, the rupiah has been one of the worst performing currencies in Asia. Redenomination talk also brings back remembrances of one of the sorriest episodes in the rupiah’s history, namely the 1997-98 Asian financial crisis. As the accompanying table indicates, the rupiah shed as much as 83% of its value against the greenback during the crisis.

Just how did this catastrophe unfold? On August 14, 1997, shortly after the Thai baht collapsed on July 2nd, Indonesia floated the rupiah. This prompted Stanley Fischer, Deputy Managing Director of the International Monetary Fund, to proclaim that “the management of the IMF welcomes the timely decision of the Indonesian authorities. The floating of the rupiah, in combination with Indonesia’s strong fundamentals, supported by prudent fiscal and monetary policies, will allow its economy to continue its impressive economic performance of the last several years.”

By late January 1998, President Suharto realized that the IMF medicine was not working and sought a second opinion. In February, I was invited to offer that opinion and began to operate pro bono as Suharto’s Special Counselor. Although I did not have any opinions on the Suharto government, I did have definite ones on the matter at hand.

After the usual open discussions at the President’s private residence, I proposed as an antidote an orthodox currency board in which the rupiah would be fully convertible into the U.S. dollar at a fixed exchange rate. On the day that news hit the street, the rupiah soared on both the spot and one-year forward markets by 28 percent against the U.S. dollar. These developments infuriated the U.S. government and the IMF.

Ruthless attacks on the currency board idea and the Special Counselor ensued. Suharto was told in no uncertain terms — by both the President of the United States Bill Clinton and the Managing Director of the IMF Michel Camdessus — that he would have to drop the currency board idea or forego $43 billion in foreign assistance. He was also aware that his days as President would be numbered if the rupiah was not stabilized. Economists jumped on the bandwagon, too. Every half-truth and nontruth imaginable was trotted out against the currency board idea. In my opinion, those oft-repeated canards were outweighed by the full support for an Indonesian currency board (which received very little press) by four Nobel Laureates in Economics: Gary Becker, Milton Friedman, Merton Miller, and Robert Mundell.

Why all the fuss over a currency board for Indonesia? Merton Miller understood the great game immediately. As he wrote when Mrs. Hanke and I were in residence at the Shangri-La Hotel in Jakarta, the Clinton administration’s objection to the currency board was “not that it wouldn’t work but that it would, and if it worked, they would be stuck with Suharto.” Much the same argument was articulated by Australia’s former Prime Minister Paul Keating: “The United States Treasury quite deliberately used the economic collapse as a means of bringing about the ouster of President Suharto.”

Former U.S. Secretary of State Lawrence Eagleburger weighed in with a similar diagnosis: “We were fairly clever in that we supported the IMF as it overthrew [Suharto]. Whether that was a wise way to proceed is another question. I’m not saying Mr. Suharto should have stayed, but I kind of wish he had left on terms other than because the IMF pushed him out.” Even Michel Camdessus could not find fault with these assessments. On the occasion of his retirement, he proudly proclaimed: “We created the conditions that obliged President Suharto to leave his job.” Now that that chapter in currency warfare is closed and has been duly entered into the annals of war, let’s turn to the contemporary rupiah story, which is one of stability.

A surprisingly resilient Indonesian economy has underpinned the stability story. Indeed, since the end of 2007, for the world’s 50 emerging market economies, only China, Lebanon, India and Nigeria have topped Indonesia in terms of cumulative real GDP growth. And growth remains hot — perhaps a bit too hot — with year-over-year GDP growth running at a 6.2% clip and consumer prices also 6.2% higher in July from a year earlier. In short, Indonesia weathered the Panic of 2008 no worse for the wear.

Anticipating the reelection of President Susilo Bambang Yudhoyono (SBY) in July 2009, investors piled into the Jakarta stock market and never looked back (see accompanying chart). As for the rupiah, it became my favorite carry trade, and remains so. The stock market is another story. Most observers put the economy’s GDP growth potential in the 6-7% range. SBY likes 6.6% and the BI seems to be biased towards the upper end of the range. I am more comfortable with the bottom end of the range.

The BI’s bias towards the high end of the potential growth range has resulted in a monetary policy that has been a bit too easy for too long. The BI will be forced to tighten and play catch up. This will take the froth off the Jakarta equity market. As for the rupiah carry trade, it should remain a winner for the foreseeable future.

To date, SBY has avoided big mistakes. This is a big plus. But if he wants to lift Indonesia’s growth potential, he will have to take aggressive initiatives to remove Indonesia’s infrastructure bottlenecks and to improve the functioning of Indonesia’s labor market (see accompanying table).

In Indonesia, laws governing businesses’ hiring and firing practices have created a dysfunctional labor market. As indicated in the table (above), Indonesia’s labor market is ranked a lowly 149 out of 183 in the World Bank’s Doing Business 2010 report.