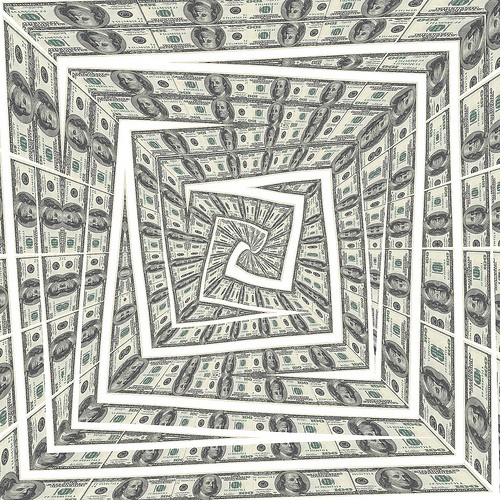 Financial panics are usually followed by sharp economic snap backs. The post-Panic of 2008 has failed to follow this typical “V-shaped” economic recovery pattern. After almost two years, the U.S. economy remains mired in an anemic recovery, with a current 2.4% year-over-year rate of growth. This paltry growth rate doesn’t even reach the U.S.’s long-term trend rate, and is well below the sizzling growth rate we should be observing (6%-7.5%). The picture is much the same in Europe, where growth is even more anemic.

The fiscalists have reached for their standard elixir — larger government deficits. For them, more fiscal “stimulus” is just what the Doctor ordered. Prof. Paul Krugman, for one, has been peddling fiscalism in virtually all of his New York Times columns for the past several months. Without yet more stimulus, he believes that a double-dip recession is likely.

Prof. Paul Krugman is not alone. There is a chorus of other academics singing the same tune. More importantly, within the Obama administration, there are strong stimulus advocates. These include: Prof. Lawrence Summers, the Director of the National Economic Council; Treasury Secretary Timothy Geithner; and Prof. Christina Romer, the Chairwoman of the Council of Economic Advisers.

The austerity side of the “austerity versus stimulus” debate within the Obama administration is well represented, too. President Obama’s Senior Advisor David Axelrod and the White House Chief of Staff Rahm Emanuel oppose the idea of larger deficits. There is also one lonely economist who has joined these political operatives — Director of the Office of Management and Budget Dr. Peter Orszag. While Capitol Hill (and most G-20 countries — led by Germany) has pushed back against the U.S. fiscalists, no one knows for certain how the political game will play out in Washington. Before the end game arrives, it’s important to determine whether the standard fiscalist (Keynesian) arguments hold water.

It is not easy to distinguish between these views on the basis of empirical evidence, because fiscal stimulus generally is accompanied by monetary stimulus. The relevant evidence is provided by those rare occasions when fiscal and monetary policy go in different directions.

To test whether the Keynesian or monetarist view was supported by the empirical evidence, Prof. Friedman recounted two episodes in which fiscal and monetary policies moved in different directions. The first was the Japanese experience during the early 1990s. In an attempt to restart the Japanese economy, repeated fiscal stimuli were applied. But monetary policy remained “tight,” and the economy remained in the doldrums. Prof. Friedman’s second example was the U.S. experience during the 1992-1997 period. Those years were marked by “tight” fiscal and “loose” monetary policies, and the economy was in an expansionary phase.

Prof. Friedman concluded with the following remark: “Some years back, I tried to collect all the episodes I could find in which monetary policy and fiscal policy went in opposite direction. As in these two episodes, monetary policy uniformly dominated fiscal policies.” In the 28-year period Prof. Congdon reviewed, the U.S. economy did not behave in the way that Prof. Krugman and other Keynesians have asserted and proselytized. Indeed, the number of years in which the economy responded to fiscal policy in an anti-Keynesian fashion was double those in which the economy followed the Keynesian dogma.

If monetary, not fiscal, policy dominates, just what is monetary policy telling us? First, the dramatic collapse in broad measures of money in the U.S. (see the accompanying chart) explains why the $862 billion stimulus of February 2009 hasn’t worked as advertised. The broad measures of money also indicate that a growth recession — below trend growth rates — in both the U.S. and Europe will continue.

But why is broad money growth contracting? After all, the Federal Reserve and the European Central Bank have dramatically increased the size of their balance sheets since September 2008. To understand why, we have to acknowledge that broad money includes credit, and credit has been contracting. Banks and other financial institutions — spooked by new legislation and the prospect of new punitive regulations — aren’t anxious to make loans. They want to deleverage and hold more precautionary balances. That’s the supplyside of the picture.

As for the demand-side, potential borrowers are deleveraging, too. They are attempting to bring their debt levels down relative to their income flows. In consequence, both the demand for and supply of credit has shrunk.

This can be seen by examining the accompanying credit triangles for the U.S. A credit triangle depicts a modern fractional reserve banking system — one in which a small quantity of reserves (capital) is multiplied into a much larger volume of loans and deposits.

At the tip of the triangle is the Fed. It provides reserves to banks and the non-bank public. This so-called high powered money is multiplied into deposit liabilities held by traditional banks in the U.S. These banks are represented in the layer directly above the Fed. The deposits of firms and individuals at these banks represent money, as measured by M2.

Shadow banks represent the next layer in the triangle. These include investment banks, mortgage finance companies, private equity pools, structured investment vehicles, etc. Banks and other financial institutions outside the U.S. accept U.S. dollar deposits, issue dollar-denominated debt and make dollardenominated loans and investments. This segment does not hold reserves at the Fed and is more leveraged than its onshore counterparts. The top layer of the triangle represents over-thecounter derivatives.

Until broad measures of money show some signs of life, the U.S. and Europe can expect a growth recession — at best.